Visiting the historic Bocelli estate for the first time, one can’t help but be struck by the pastoral beauty of the farm itself, and also by the humble, countryside origins of a talent now famous across the globe. Located in Lajatico, a quintessential Tuscan town near Volterra, the family’s 20 hectares of vineyards sit perched on a ridge between two wide, meandering rivers and are surrounded by medieval forests. A short walk down the road is the Officine Bocelli, the sleek wine bar designed by Alberto Bocelli that also doubles as an art museum. And on the far side of the village, the windswept Teatro di Silencio (the Theatre of Silence) waits on its ancient hillside for the single day each summer when Andrea returns to perform in his home town.

For almost 200 years, the Bocelli's have crafted classic Italian wines on their small single estate. Beginning in the 18th century, they were mere sharecroppers on the property of the noble Corsini family. On March 21, 1831, however, Gaspero Bocelli used all his savings to liberate himself and became a landowner. Acquiring the small Poggioncino parcel for the sum of 1000 scudi, he began growing Sangiovese. 7 generations later, Alberto and Andrea Bocelli have revolutionized the cellar, transforming their family farm into a world-class winery that blends the past and present. Needless to say, the two brothers have embarked on various other paths over the years. Alberto earned his degree in architecture, and Andrea studied in law prior to his career as a world-renowned tenor. Over time, however, the estate has remained a center of gravity for both and, Renaissance men to the core, they have struck upon the perfect balance of art and science with their creations.

Beginning in 2010, the Bocelli's also began making wines in close concert with a small group of friends to produce a broader array of everyday offerings (Bocelli Family Wines collection). For instance, the family has partnered with a collective of small, organic farmers in Scansano (southern Tuscany), where the Sangiovese is famous for its expressions of wild, dark cherry. Also, in the northeast Veneto, Alberto and Andrea have teamed up with Salvatore Lovo to create their pitch-perfect Prosecco and Pinot Grigio. True to form, these non-estate vineyard sites remain hand-harvested and earth-friendly, and average just one bottle per plant. 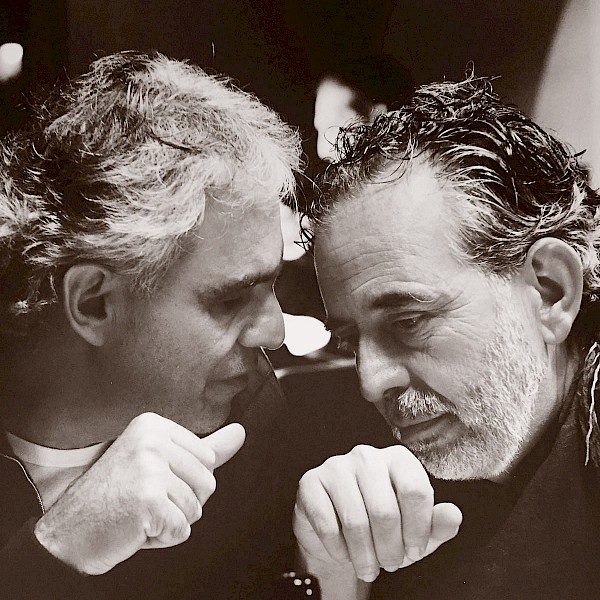 Enologist
Paolo Caciorgna
Grapes Grown by Winery
Cabernet Sauvignon, Canaiolo, Chardonnay, Glera, Malvasia, Merlot, Pinot Noir, Pinot Grigio, Sangiovese, Vermentino
Vineyard Size
20.0 ha
Winemaker
Alberto Bocelli
Winemaker Biography
While both Alberto and Andrea enjoy successful careers outside of wine, neither has forgotten their rootstock, and their historic farm near Volterra remains a wellspring of family pride and inspiration. Since 1831, generations of Bocelli’s have left their fingerprints on bottles, and these two brothers have elevated wine to an artform.
Winemaker Generation
7th 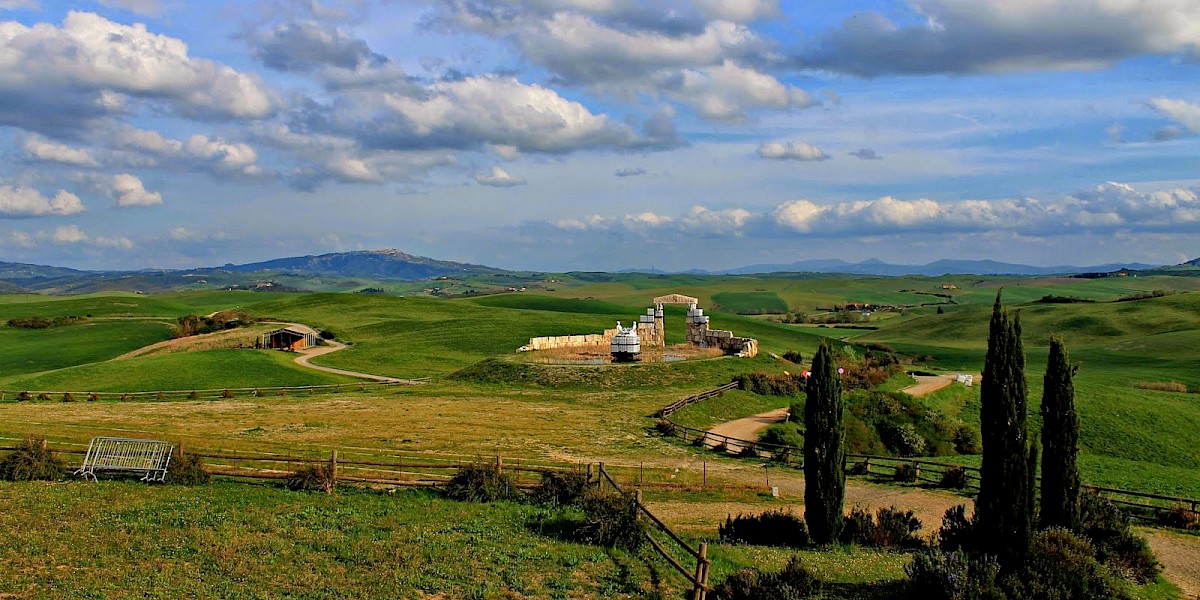 Andrea Bocelli’s family has been making wine since the early 1700’s, and began selling it locally in 1831. Thus, the Bocelli 1831 line honors their proud history, and in this case, celebrates in style with bubbles! Their Sparkling Brut Rose is a luxurious experience, with heady and vibrant aromas promoted by a full 4 months on the lees. The elegant pink hues are highlighted by flecks of silver perlage, with strawberries, citrus, and a touch of river salt on the nose. This is a truly exceptional wine in the tradition of a first-rate Franciacorta.

Tenor Andrea Bocelli and his chief winemaker brother, Alberto, are true connoisseurs of Tuscan wines, and few capture the spirit of their beloved coastline like Vermentino. Remarkably clean and refreshing, this varietal has aromas of citrus, acacia flower, and honeycomb. Its generous, saline character is reminiscent of the sea, and pairs flawlessly with grilled fish, scampi, pecorino, and all antipasti. This is a small production gem that communicates the exacting standards and passion of the Bocelli family.

Bocelli ‘Operetta’ Pinot Grigio is named in honor of the whimsical musical fables loved by Andrea Bocelli and his family. This delightfully crisp, complex DOC is grown in the green hills of Colli Euganei in the Veneto, where the vines are old, knotty and expressive. They grow just enough grapes to make about one bottle of wine per plant, a remarkably low yield that produces intense, integrated flavors. With an array of fresh Meyer lemon, mint, white flowers and sea salt, this higher altitude white is zesty and delicious.

Long before Andrea Bocelli was famous for music, his family was known for making wine. For over 130 years, they have crafted classic Italian wines on their Tuscan farm. Now, in collaboration with the Lovo family in the Veneto, they bring this beautiful sparkler to the rest of the world. Motivated by their considerable charitable endeavors, the Bocelli’s enjoy few things more than sharing Italian music, food, and wines like this one with their friends. Mineral-laden, and with crisp, beautiful perlage, it’s a kiss of citrus and peach in a glass.

For over 130 years, Andrea Bocelli’s family has made small-batch Italian wines on their Tuscan farm. Now, with this clean and vibrant Sangiovese, they have created a fantastic, everyday staple to share with the world. Unoaked yet lush, this Tuscan classic positively sings with dark cherry, black tea, and berry compote. A touch of graphite and soy add to the juicy, crowd-pleasing palate.

Made from 70 year-old Sangiovese vines and lush, bright Cabernet Sauvignon, Alcide is named for the grandfather of Alberto and Andrea Bocelli. With a tiny case production, this is a thought-driven, elegant blend from the private family farm of the famed Italian tenor. Deftly coopered with French oak barriques, the old vines lend a terrific minerality and intensity to the wine - one that can’t be duplicated by young vines or large production. A very rare treat for the discriminating Italophile or classical music aficionado.

From Andrea Bocelli’s family estate in Toscana comes In Canto, named after his first studio album. A smooth and powerful Cabernet, this elegant red confidently fills the senses. With just a few hundred cases made, every plant is fussed over, and every bottle counts. Andrea’s brother, Alberto Bocelli, makes this wine with a genuine passion for the French-origin varietal. In their hometown of Lajatico, near Pisa, the ripening season is longer than many other areas, yielding a decadent wine with genuine character.

From the family estate of opera singer Andrea Bocelli and his brother, Alberto, comes their flagship Sangiovese. With bold tannins and layers of tart cherry, sweet black currant, and violets, this terroir-driven wine is named Terre di Sandro which translates to “Earth of Sandro” (Alberto and Andrea’s father). Made from older vines and aged for 18 months in French barriques, it possesses a heft and an elegance similar to (dare we say it?) Brunello di Montalcino.

Named in honor of the great tenors that have inspired him, “Tenor Red” is a lofty blend of Sangiovese, Cabernet Sauvignon, and Merlot. To make it, Andrea works directly with his brother Alberto, who is also the architect behind the famous “Teatro del Silenzio” (Theater of Silence), in the hills of their hometown. For 364 days per year, the outdoor ampitheater is quiet and serene. But one day per year, it erupts with music, wine and celebration... Like everything else they do, this wine comes from a place of true passion!

From the family estate of opera sensation Andrea Bocelli, “Poggioncino,” is a tasteful, lighthearted Sangiovese just as classic as the famous Tuscan himself. The estate, founded by the Bocelli clan 130 years ago, makes just a few hundred cases per year. Led by brother Alberto and sister-in-law Cinzia, the family takes pride in promoting the terroir of their local Sangiovese. Dried cherry, sage dust, and ripe berry are the hallmarks of this wine. A bit rustic, it pairs well with powerful meats, creamy soups, and salty cheeses.